Employee misclassification can cause serious problems for injured workers in Boston.  This issue is becoming even more prevalent as we find ourselves in what is being called, “the gig economy.”

The term is used to describe people who do not a have a traditional steady job, and instead work to earn a living by taking “gigs” that become available online. Although the phrase isn’t new (musicians have long been fond of it), it has taken on a new meaning. Today a gig can include driving for ride sharing services like Uber, signing up to perform handyman type jobs on demand and a variety of other activities such as writing articles for news services.

Employers are happy with this arrangement because it means they can get people to do work for them, while also avoiding the time and expense associated with having a traditional employees. There is typically no need to withhold taxes, provide healthcare or extend other benefits. Politicians also like this because these gig workers are earning money and considered employees for the purposes of state and federal unemployment numbers.  END_OF_DOCUMENT_TOKEN_TO_BE_REPLACED

When you are injured on the job in Boston, if you wish to be compensated for your time, you cannot work, and, to pay for your past and future medical bills, you will need to file a workers’ compensation claim with your employer.

There is a process established in Chapter 152 of the Massachusetts General Laws (MGL), which makes up the Workers’ Compensation Act (WCA).  Pursuant to the various sections of Chapter 152 of the MGL, you must first report the injury to your employer and make sure it generates an accident report. If you are in need of medical attention or missing work as a result of the workplace accident, or both, you must file a workers’ compensation claim with your employer. END_OF_DOCUMENT_TOKEN_TO_BE_REPLACED

Fatal on-the-job injuries are a tragic reality for far too many families in Massachusetts. When this happens, workers’ compensation may be the most appropriate remedy, at least initially. Third party liability may still be explored, but workers’ compensation provides prompt, no-fault payment for medical bills, a portion of lost wages and funeral expenses.

According to a recent news story from Fox 5, a worker was killed when he fell into a collapsed cesspool.   This 59-year-old victim was working a job in which was installing a new septic system, when the existing cesspool vault completely collapsed causing a massive hole in the ground.

Witnesses say that it appeared as if the man was swallowed by the earth in a split second.  There was another worker who also fell into the newly formed massive crater, but he was able to climb out.   There was no way to see victim, as he was covered in dirt and they knew he would not survive long due to the weight of the dirt and the possible lack of oxygen. END_OF_DOCUMENT_TOKEN_TO_BE_REPLACED

Construction sites in Boston are among the most perilous workplaces in the state. Workers must constantly be on-the-lookout for a wide range of hazards. Unfortunately, sometimes even the most cautious workers are injured and need of workers’ compensation benefits.

According to a recent news report from the Miami Herald, worker was seriously injured while on a construction job due to falling glass. Authorities have said worker, who is 50-years-old, was working on a construction project at hotel on Biscayne Blvd. when the accident occurred.

The injuries resulted from large sheets of glass falling on him.  The weight of the glass and the velocity the sheets achieved were enough to crush the worker’s leg.   Co-workers immediately called 911, and, when first responders arrived on the scene, they found him in severely critical condition.  They did what they could to stabilize the patient and control the bleeding before rushing him to a local level-one trauma center for further treatment.  It was not immediately known how or why the glass fell on worker’s leg. END_OF_DOCUMENT_TOKEN_TO_BE_REPLACED

According to a recent news article from the Kansas City Star, one worker was killed and four others were injured when an explosion occurred at an ammunition factory.  The explosion happened around 1 p.m. in a building at the plant where primer is manufactured. In a center fire ammunition casing, there is a metal cap that contains primer powder.  When the hammer or firing pin strikes the priming cap, the small explosion that is created is designed to ignite the main powder charge inside the shell casing. 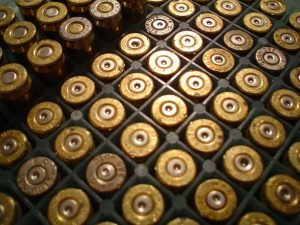 After the explosion occurred, first responders were immediately called to the factory to make sure there was no fire and to offer assistance to the five workers who were caught in the explosion.  This particular factory is managed by the U.S. Army Joint Munitions Command and is staffed largely by civilian contractors under the supervision of U.S. Army personnel, including enlisted service members and officers. END_OF_DOCUMENT_TOKEN_TO_BE_REPLACED

Over the past year of so, we have been hearing a lot on the news about the alarming rates of people addicted to opioid painkillers and heroin across the nation. Many cases begin with a person who suffers a work-related injury and then goes on narcotic medications to deal with the pain when over-the-counter medications like Motrin no longer work.

Experts believe that there are statistically significant numbers of people who are addicted to opioid painkillers who are also receiving workers’ compensation benefits.  This is not to say that everyone, or even most people are who receive workers’ compensation benefits are addicted to painkillers, but, if programs can be established to help those who are, then it could have a positive effect on everyone involved, as well as society as a whole. END_OF_DOCUMENT_TOKEN_TO_BE_REPLACED

After the Deadliest Catch premiered more than a decade ago, Americans grew increasingly enamoured with the idea of exploring the world’s most dangerous jobs in America.  While there are certainly some jobs that are more dangerous than others, most of the workplace injuries occur at jobs that are not likely to be the basis of a reality television show.

One of the types of employment that often results in an injury for which someone would file a claim for workers’ compensation benefits is factory work.  In many cases, we have people doing repetitive tasks for an entire day while standing and reaching overhead in uncomfortable positions.  This has resulted in many instances of carpal tunnel syndrome (CTS) and other types of repetitive stress injuries (RSI) as well as other types of traumatic injuries such as cuts, abrasions and even amputations.  This can be a result of poorly guarded machines or it can just simply be an accident for which nobody is at fault. END_OF_DOCUMENT_TOKEN_TO_BE_REPLACED

State and local agencies have been looking into the company that was handling a construction project where to two Boston workers were killed when they drowned in a trench after a water main ruptured.  In that on-the-job accident, the trench in which the two men were standing and the entire street quickly filled with water after a main broke, and there was nothing anyone could do to save the two men.  What was supposed to be a rescue effort quickly became a recovery operation as firefighters worked for hours into the night to recover the bodies of the two deceased workers.

According to a recent news article from the Boston Globe, a great deal of information is coming to light about that construction site that has people asking questions.  One piece of information that came to light was that the City of Boston had allegedly told the construction company that it would not be granted any new work permits for jobs in the city until it made some major changes as to the way they do business. END_OF_DOCUMENT_TOKEN_TO_BE_REPLACED

Over the past month or so, the Boston Globe has been investigating the conditions under which many immigrants are forced to work.  The paper published an exposé on this issue the previous week and is now looking at some of the myths commonly believed by these immigrant workers that allow employers to take advantage of them. Some of these myths deal with the issues pertaining to workers’ compensation.

One of these myths is that when a worker takes a job, he or she is assuming the risk that they will be injured on the job, and if that worker does not have adequate health insurance, that loss will fall on them, as their employer is not responsible to cover them for any medical expenses or lost wages. In fact, this could not be farther from the truth. END_OF_DOCUMENT_TOKEN_TO_BE_REPLACED

In Hudspeth Regional Center v. Mitchell, a workers’ compensation case from the Supreme Court of Mississippi, claimant was injured when she fell at work.  At the time of her accident, claimant had been working as a registered nurse supervisor for her employer.

On the day of her injury, claimant suffered a serious fall and injured her back.  She was taken to the emergency room following the fall and was later treated by various doctors and medical professionals as part of her prescribed treatment plan.  After six weeks of recovery, claimant went back to work in the same position as she held prior to the workplace accident. END_OF_DOCUMENT_TOKEN_TO_BE_REPLACED