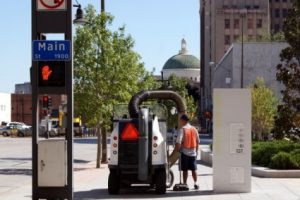 Once they got the street sweeper of the victim, they attempted to provide immediate medical attention.  EMTs realized that he was in far too serious condition for an ambulance ride to a local hospital, so they called in a medevac helicopter, so the victim could be airlifted to a larger level-one trauma center.

A medevac helicopter from the the area quickly arrived, and the crew transferred him to the air unit while continuing to work on his injuries.  While he was still alive when they left the scene of this horrific workplace accident, he did not survive the ride to the hospital and was pronounced dead upon arrival.

One man interviewed for the article who witnessed what happened was the owner of a local food truck that services the jobsite.  He said he had been there every day for the duration of the project, and there had been very few accidents up until that point, and none of them were very serious.  He said he knew most of the construction workers, as they would frequent his food truck while on the job.   He also said that the street sweeper did not appear to be owned or operated by anyone on the same crew as him, and he was not apparently an employee of the deceased worker’s employer.

However, as Boston workers’ compensation attorneys have seen in various cases, when the accident was caused by a third party who does not work for the employer, the injured worker may be able to file for workers’ compensation benefits and still file a personal injury lawsuit. This situation most commonly arises when a worker is injured in a car accident while on the job.

If you or someone you love has been injured a Boston work accident, call for a free and confidential appointment at 1-888-367-2900.