Interiano-Lopez v. Tyson Fresh Meats, a case from the Nebraska Supreme Court, involved a claimant who was living in Iowa and working at a meat packing plant in Nebraska.  He had various responsibilities as a result of his employment, but one of his jobs was cutting open the stomachs of cows.  This part of the cow is known as the paunch in the meat packing industry, and the contents of the stomach are supposed to dump out on the factory floor as part of the dump paunch line of production. 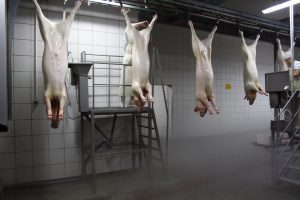 In October 2013, claimant was working on the line with a trainee, and allegedly failed to properly hanging the meat on meat hooks. As a result, pieces of meat kept falling off the hooks as they passed buy the dump paunch line.  In order to cut the paunch, claimant had to lift each piece of meat back onto the hooks in a proper manner, and his arms were getting very tired. At this point, his job was getting very difficult, and one of the heavy hooks managed to knock into claimant’s shoulder.  When this happened, he could feel his shoulder pop and he was in a lot of pain and could not really use his arm any longer. When this occurred, he was taken to the first aid center at the meat packing plant and then an ambulance was called to his job so he could be taken to the emergency room for further treatment.

Claimant filed a petition for workers’ compensation with the commission.  He was asking that he either be given a permanent total disability (PTD) rating or a temporary total disability (TTD) rating and in addition to his PTD benefits, he be also awarded continuing medical benefits and vocational training.

In response to this, his employer filed an answer, which is called a counterclaim.  In this answer, the meet packing company denied liability and also claimed that claimant was not entitled to benefits because had already received some benefits and should not be entitled to anymore.

As you can discuss with a Boston workers’ compensation attorney, the workers’ compensation system is designed to provide workers who are injured on the job, or become ill as a result of a job-related illness.    The manner in which employer was disclaiming liability was because they are argued that he was not hurt on the job, but rather suffered from a pre-existing condition.   In any event, the trial court granted the plaintiff’s motion and dismissed the cause of action against employer.

One of the things that makes this occurrence interesting is that since workers’ compensation is a no fault system, it is generally not necessary to disclaim liability.  However, there is always the possibility that a third-party defendant may be responsible, and this person can be sued directly by being named in the complaint or later added to the action.