According to a recent news report from NBC News, a man was working on constructing prototypes for President Trump’s planned wall between the U.S. and Mexico border.  While there is no funding for an actual wall at this time, there was funding already in the budget for border security that is being used to construct a series of prototype walls that are supposed to be helpful in deciding on how to construct the actual border wall should U.S. Congress approve funding. 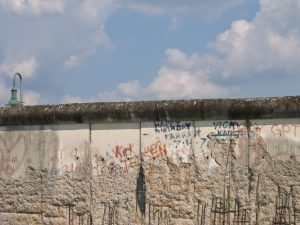 While this worker was helping to construct one of the prototypes, he lost his footing and fell into a 40 foot deep hole.  According to U.S. Customs and Border Protection (CPB), the accident was the workers’ fault because he was allegedly not paying attention and fell into the deep hole.  Somehow, the man was not injured in the accident.  Other construction workers were able to pull him out using a construction hoist and he was back on his feet in no time.  Once the worker was back on his feet and there was no need to stop construction work as nobody was injured.  This was one of four prototype walls that are being constructed for feasibility testing.

It is likely the worker who fell down the 40-foot hole hit the sides of the hole, which slowed his dissent to the bottom preventing him from being injured or killed.  As our Boston workers’ compensation attorneys can explain, even though the employee was blamed for allegedly being careless, had he been injured, under the workers’ compensation system, it wouldn’t matter whose fault it was.

The worker’ compensation system was set up as no fault system.  Pursuant to Chapter 152 of the Massachusetts General Laws (MGL), which is the workers’ compensation system for the Commonwealth, it is only necessary to prove that claimant was an employee within the meaning of the statute, and that employee was injured or the job or suffered from a work-related illness.  While the statute was setup to include both workplace injuries and work-related illnesses, workplace injuries do make up the majority of Boston workers’ compensation cases.

Employers want to avoid being at risk for being sued, because even if they were able to successfully defend the case, it could cost them a considerable amount of money in legal fees.  They would rather have set costs and pay a workers’ compensation insurance carrier.  They also did not want to have to worry about large jury verdicts in personal injury and did not want to have any exposure for pain and suffering damages, which are not available in a workers’ compensation claim.

The reason this was considered a compromise is because while the employees could not receive pain and suffering damages, they would not have to prove fault on behalf of the employer and it is personally fine if the employee was at fault in the accident so long as they did not intentionally injury themselves.

However, employee would be required to reimburse employer’s workers’ compensation insurance company for any benefits paid out of the civil recovery to prevent what is known as double recovery.  The other important point is that the third party defendant cannot work for the same employer or else they would not really be a third party.  This situation arises when someone is injured on the job by another worker. If that other worker was a vendor who did not work for employee or the employee worked for a different company, they would still be considered a third party.