Working at any construction or demolition site is dangerous work.  Every year, many workers are injured and killed on construction sites from accidents that involved being crushed by falling debris or materials, being run over by large construction equipment, being injured by power equipment, and other similar accidents.  When dealing with construction projects on skyscrapers, we see other types of serious accidents, including workers falling to their deaths from extreme heights. 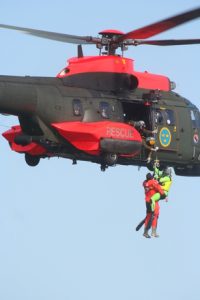 According to a recent news feature from the Los Angeles Times, a worker was injured in a crane accident 270 feet above the ground and had to be rescued by a hoist from a helicopter. Witnesses say the 50-year-old crane operator suffered a serious injury on the job that made it impossible for him to climb down the ladder to safety and to get medical attention.When co-workers called 911, first responders quickly learned that the man was injured and unable to get himself down from the crane that was secured to the top of a building.  In some large cities, tower cranes are required to be erected inside the foundation of a building to prevent them from falling over and injuring people and property below.  In areas without such a restriction, we have seen cranes fall over and cut cars in half and injure and kill motorists and pedestrians down below.

In this case, the first responders had no way to get him down without air support, since they could not carry him down the ladder in his current condition without serious effort and risk of further injury to rescue workers and the injured worker. With that in mind, rescue workers called in a helicopter operated by the fire department to the scene to get the injured worker to safety.