Whether you are in Boston, New York, or any other major city in the United States, working in the subway or in other areas of public transportation can be very dangerous.  We are typically dealing with fast moving trains and other moving machinery and it is not hard to imagine how workers could be injured or killed. 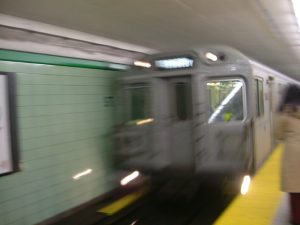 According to a recent news report from the Gothamist, one New York City transit worker was killed and another was injured when a G train hit them.  Unlike some other cities, the system there runs all 24 hours a day, so it is important to be alert and wear reflective clothing whenever workers are on the tracks.  It is also imperative that safety controllers are constantly aware of the location of all workers and whether they will be near any moving trains.  There are hideouts alongside the tracks that should allow workers to hide if a train is coming, in order to prevent an injury, but the location and state of these protective hideouts is currently under review.In this case, the crash occurred around midnight.  The two men who were hit by the G train were working as flaggers.  They are supposed to go onto the tracks at night and place lanterns, so the track workers can see what they are doing, and a train operator should be aware there are workers in the tunnel.

While the two men were in the tunnel, a southbound train went around a curve at full speed and pinned both workers between the moving train and the concrete walls of the tunnel.  To make matters worse, while rescue workers were called to the scene, they are not allowed to approach the victims until the third rail is turned off.  This is a safety protocol so that others are not injured or killed while attempting to rescue the victims.

While the NYPD Emergency Service Unit (ESU) is trained and equipped for high-risk rescue operations, this was not their ordinary type of job, based upon the location of the men in the tunnel.  Between the distance and the third rail issue, while they worked as quickly as possible, the rescue effort took some time.  Authorities have said that one of the workers, who was 53 years old, died as result of his injuries.  The other worker, who is 49-years-old, suffered severe injuries but is expected to survive.

One thing that many people are not aware of that you can discuss with a Boston workers’ compensation attorney, is that, when a loved one dies as result of a workplace accident or work-related illness, his or her estate may be entitled to what is known as a death benefits award.  This can be a considerable amount of money, as it is designed to compensate a worker’s family, since their deceased family member is no longer alive to earn an income, as he or she would have for many years to come.