A recent case from the Supreme Court of Washington, deals with the scope of workers’ compensation exclusivity rules regarding an auto accident involving two co-workers that occurred as one was leaving a shift and one was just coming on.  The two employees worked together at a major aerospace engineering corporation. 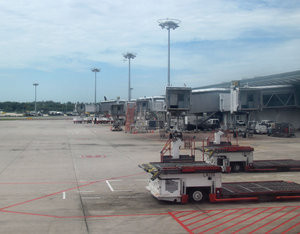 At around 6:30 a.m., after the defendant finished working his overnight shift at the aircraft factory, he was walking to his car where it was parked in the employee parking lot. He then got into his vehicle and drove across an access road still located on factory-owned property.  This was not a publicly maintained roadway.

As he was driving on the factory-owned and maintained roadway, he allegedly crashed into another employee who was walking across the access road on his way to work.  He was injured severely in this car accident and filed for workers’ compensation benefits, which he received from his employer.   In addition to filing for workers’ compensation benefits, he also filed a lawsuit against the defendant under a theory of negligence.

There is, however, an exception to this rule if the injury was caused by a negligent third party.  A car accident is a common situation where the accident was caused by a negligent third party.  In that case, the employee can collect workers’ compensation benefits and all file a personal injury lawsuit.  The situation gets more difficult when the so-called third party is also an employee.  Normally, he or he would not be considered a third party, but in this case, the accident happened on hours when they were not on the clock.

For this reason, the plaintiff asked for a pretrial ruling that the defendant was a third party, since the accident occurred during non-work hours. The trial court denied this motion, and the lawsuit was dismissed.  At this point, the plaintiff appealed the dismissal.  The argument for the defendant was that the accident occurred on a company-owned access road, and he was on his way home from work, which was acting in the scope of his employer’s interests.

On appeal, the court held that going home from work was not acting in the scope of his employer’s interest, because he was on his time headed home.  This an example of what other courts and workers’ compensation attorneys typically refer to as the coming and going rule. For this reason, the appeals court ruled that the defendant was not coworker during non-working hours and reversed and remanded the case for further proceedings consistent with its opinion.  This means that the case could continue through discovery and eventually a trial, should it get that far.